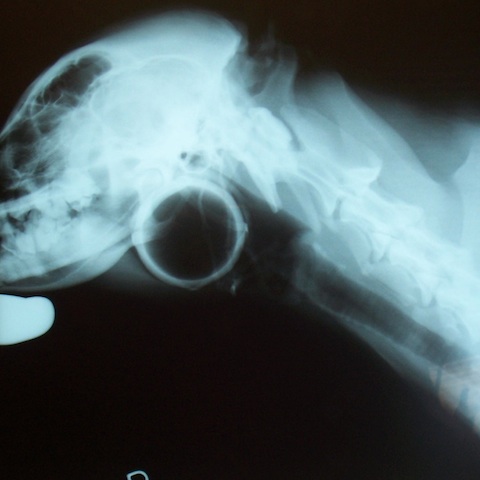 Meet Riley! He is our tennis ball- eater! As his dad says, “one would think that with 2 tennis balls in his mouth, there would be room for no more – but not our Riley!”
With the addition of the third tennis ball, one got caught in his throat and he was having trouble breathing.

Mom rushed him in and we sedated him and were able to retrieve the ball with a long instrument (a bone forcep!) Riley is home and doing great (and on tennis ball probation!) 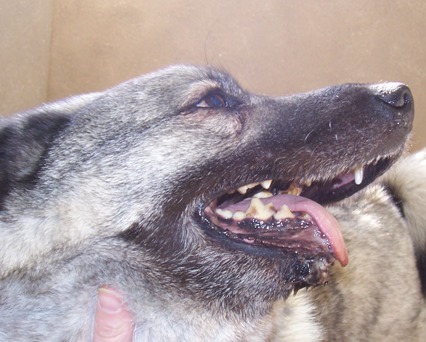 Einstein is a 7 and 1/2 year-old Norwegian Elkhound who came in on December 14, 2007 to have some odd looking red spots on his gums examined. He had several small red lesions just below the gum line of his incisors, on his lower jaw.

His incisor teeth were a little bit loose and we worried about the possibility of cancer. Three days later he came in and Dr. Kate took biopsies of the abnormal areas.

The histopath results of the biopsies came back as Squamous Cell Carcimoma, a cancer of skin cells that is a common tumor in dog’s mouths. His owners, Corinna and Randy were very concerned and we referred them to the cancer specialists at Animal Cancer and Imaging were he saw Dr. Richard Walshaw.

They took X-Rays of his chest and abdomen and did not find any evidence of metastatic disease (no tumors in his lungs or belly).

Einstein then had a bilateral rostral mandibulectomy – he had his lower jaw surgically removed just in front of his pre-molars. They sent the piece of jaw to a pathologist to look at sections under a microscope and make sure that the surgeons got all of the cancer cells.

The pathologist did not see any evidence of tumor going beyond the surgical margins. The tumor appears to be completely excised!

Einstein came in for a recheck with us April 1, 2008. We re-took x-rays of his chest and re-checked his bloodwork. Everything looks good, and Einstein is adjusting well to his new look. He drools more than he used to, but he is back to playing tug of war with his dad and cuddling with his little brother! 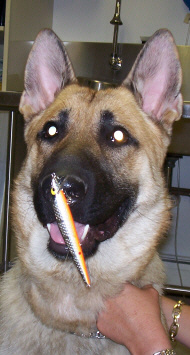 “Mo” is a 10 month old German Shepherd puppy who loves to fish! On a recent fishing excursion, “Mo” decided that the fishing lure was way too “alluring” to resist and decided to play with it. He jumped up for the pole that was leaning up against a wall and ended up getting the fishing hook stuck right in his NOSE!

Dr. Wilson examined the sweet, curious pup and removed the fishing hook under anesthesia. He was sent home with pain medication and was advised to consider a new hobby – one that doesn’t include sharp objects!!! 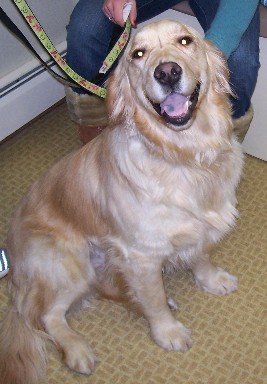 The Case of the Dog with the Stomach of STEEL!!!

Gracie is a young Golden Retriever with a stomach of steel. Gracie’s parents called us after she ate an entire box of Brillo pads!

Okay, maybe curiosity got the best of her when she decided to eat the first one….. but one would think that after eating the first, she would have no interest in the rest of the box! Not so! Our little Gracie proceeded to eat every last one! When she showed up at the clinic, she acted like nothing even happened! She was as happy as ever! That’s a Golden Retriever for you!

Dr. Kate took an x-ray to confirm that the steel wool pads were, in fact, in the stomach (and what a large, distended stomach it was) and then booked her for surgery that same afternoon with Dr. Corey. An intravenous catheter was placed, she was started on antibiotics and medication to protect her gastrointestinal tract, and she was anesthetized for surgery.

Dr. Corey removed 7 and 1/2 large steel wool Brillo pads from Gracie’s stomach and flushed her abdomen. We saved the offending Brillo pads for Gracie’s family to see and save as a souvenir!

Gracie was in for her suture removal today and looks great!!! Her family tells us that a friend brought over a box of Brillo pads the other night as a joke and Gracie’s mom said, “No way! I don’t even want them in my house!!!!” We can’t say we blame her.

We are so happy that Gracie is all better and we hope that she learned her lesson! Gracie no longer has a stomach of steel but she will always have a HEART OF GOLD! Can you count the Brillo pads???

Our veterinarians are dedicated to providing the best possible healthcare by getting to know you and your pet.

Brinker Veterinary Hospital offers a wide range of veterinary services for pets in the following areas: